94 East was a Minneapolis-based funk group formed in 1977 by Pepe Willie, the husband of Prince’s cousin. Willie was largely responsible for getting Prince’s career up and running, and soon enlisted the talents of a young Prince and his childhood best friend, Andre Cymone. Prince also composed numerous songs for them while they were still together, including ‘Just Another Sucker’. The band disbanded when Prince became a star in his own right. 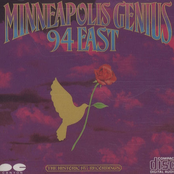