Abdi Behravanfar(Persian: عبدي بهروانفر) (born 1975) is an Iranian guitar player and he plays harmonica in country blues style with Fleming Khoshghadami. In 2000 he formed a band named Mud Band with 5 other members. They performed 4 concerts in blues rock and folk rock styles. Behravanfar made music for 4 short films,the one called "Gone Far Away" won the prize for the best music in JAVAN festival film in Iran. He also collaborated with Mohsen Namjoo on his Toranj album. 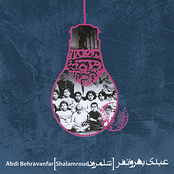