Albert Allick Bowlly (7 January 1898[1] – 17 April 1941) was a British vocalist who was popular during the 1930s in England. He recorded more than 1,000 records. His most popular songs include "Midnight, the Stars and You", "Goodnight, Sweetheart", "The Very Thought of You", "Guilty", "Love Is the Sweetest Thing" and the English version of "Dark Eyes", the "Russian Gypsy" song by Adalgiso Ferraris as "Black Eyes" with words of Albert Mellor. 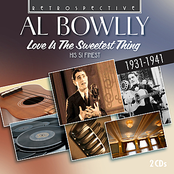 Love Is The Sweetest Thing