Apollonia 6 was a 1980s female singing trio created by Prince as a continuation of a previous group, Vanity 6. After a number of disputes with Prince, Denise Matthews, also known as Vanity, the lead singer of Prince-created Vanity 6, fled the Prince entourage in 1983 to pursue solo endeavors recording with Motown Records and acting in films. She left open an acting position for the role written for her by Prince in the film Purple Rain. After a frantic casting call, the film's director met actress and model Patricia Kotero. 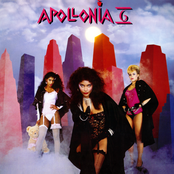