Artie Shaw (born Arthur Jacob Arshawsky in New York City) grew up in New Haven, Connecticut, where his natural introversion was deepened by local antisemitism according to Shaw's autobiography. Shaw began learning the saxophone when he was 13 years old, and by the age of 16, he switched to the clarinet and left home to tour with a band. Returning to New York, he became a session musician through the early 1930s. From 1925 until 1936, Shaw performed with a variety of bands and orchestras, including those of Johnny Caverello and Austin Wylie. 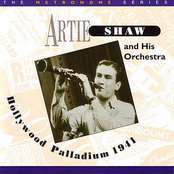 In the Blue Room/In the Café Rouge