There are multiple artists with the name "Black Ace". 1) Black Ace was the most frequently used stage name of American blues musician Babe Kyro Lemon Turner (b 21 December 1907, Hughes Springs, Texas – d 7 November 1972, Fort Worth, Texas), who was also known as B.K. Turner, Black Ace Turner or Babe Turner. He was raised on the family farm, and taught himself to play guitar, performing in east Texas from the late 1920s on. During the early 1930s he began playing with Smokey Hogg and Buddy Woods 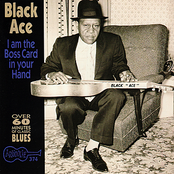 I'm the Boss Card in Your Hand