1) Black Nasty was a little-known group in the early-'70s Detroit funk scene, following the path of the Parliament/Funkadelic crowd in mixing rock, psychedelic, soul, and funk influences. They recorded a fair album for Stax that was released in 1973, but wasn't a heavy seller. After losing their contract with Stax (which would soon go out of business anyway) in 1975, they changed into different R&B acts that would have a little more commercial success. 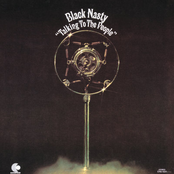 Talkin to the People