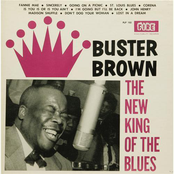 New King Of The Blues

Jackie Brenston and His Delta Cats