Cindy Sizer was founded in 2005 by Philipp Schoepfer and Sinnfrei.INC as a live dance band to compete against DJ boredom. The are constantly reinventing their style and releasing dance tracks and performing improvised endless live sets and regular gigs on various occasions. From galleries to fashion shows to festivals to pirate public performances, their innovational skill and playing carelessness is not found again. In 2007 UpitUp released their first album Cindy Sizer which is a dedicated to low bit 80s plastic synthesizer and drum machines. 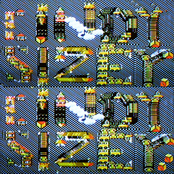