Deep Cotton is an American funk duo based in Atlanta, whose members are Chuck Lightning and Nate "Rocket" Wonder. Part of the Wondaland Arts Society, they are also sometimes called the "Punk Prophets". Lightning and Wonder met in 2002 at Morehouse College in Atlanta. They produce music, including that of Grammy nominated artist Janelle Monáe, another co-founder of the Wondaland collective. They began to gain notoriety of their own after their song 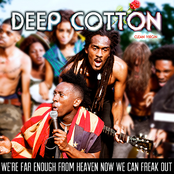 We're Far Enough From Heaven Now We Can Freak Out