Diana Dors, born Diana Mary Fluck in Swindon, England, in 1931 was a film and TV actress promoted by Rank as a british Marilyn Monroe. After a 1960 swing-influenced album Swinging Dors, she released several singles up until the eighties. She also appeared on the cover for The Beatles' Sergeant Pepper's Lonely Hearts Club Band and in the video for Adam and The Ants' Prince Charming. She allegedly on her death in 1984 left a fortune in multiple bank accounts under false names, protecting the whereabouts with a cipher. 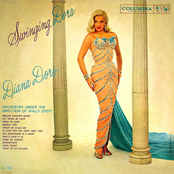