El douje was born Douglas Smolens in Guadalajara Mexico in the early 1970’s. From an early age, he was exposed to and sought out a diverse range of musical styles. In high school, he started playing drums in a band that would go on to become Don Salsa and record the legendary cult phenomenon, Kool-Aid Moustache in Johnstown. It wasn’t until after that album was finished that he really heard flamenco music for the first time, and his life would be changed forever. 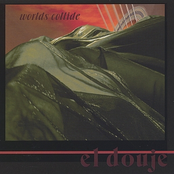