Frank Stokes (January 1, 1888 – September 12, 1955) was a blues musician who is considered by many musicologists to be the father of the Memphis blues guitar style. He was born in Shelby County, Tennessee, in South Memphis' largest vicinity Whitehaven, located two miles north of the Mississippi line. He was raised by his stepfather in Tutwiler, Mississippi, after the death of his parents. Stokes learned to play guitar as a youth in Tutwiler, and 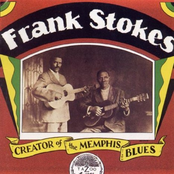 Creator of the Memphis Blues