Frankie Smith is a funk musician and R&B/soul songwriter. He was a writer for funk and soul artists such as the O'Jays and The Spinners. He has also been influential in the careers of the rappers Tone Lōc and Ice Cube. With his 1981 single "Double Dutch Bus" released by WMOT Records, Smith popularized a nonsensical form of slang, in which "iz" is placed in the middle of a word (place becomes plizace) or the last letters of a word are replaced with "-izzle" (sure becomes shizzle). 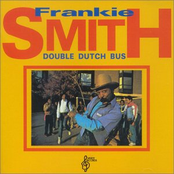