The Ghetto Brothers were a gang (or club) and music group founded in New York City's South Bronx in the late 1960s. The gang eventually spread to much of the Northeastern United States. Like the Young Lords, they were involved in Puerto Rican nationalism, including, in the case of the Ghetto Brothers, an association with the then-new Puerto Rican Socialist Party. This gang had political motivation to uplift young Spanish and Black men in the community. 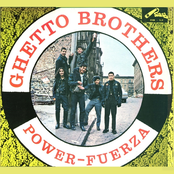