Girls in Airports is the sound of young Danish jazz in the year 2011. Two saxophones make up the epicentre, and from this core spreads a skewed and charming mix of jazz, Afro beat, Nordic melancholy and tunes with Middle-eastern touches. They move effortlessly between beautiful ballads and hot, sweaty rhythms, something that has proved to be a turn-on for critics and fans alike. The band won the DMA 2010 for best Danish crossover jazz release. 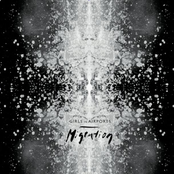