Eddie Jones (December 10, 1926 – February 7, 1959), better known as Guitar Slim, was a New Orleans blues guitarist, from the 1940s and 1950s, best known for the million-selling song "The Things That I Used to Do", produced by Johnny Vincent at Specialty Records. It is a song that is listed in "The Rock and Roll Hall of Fame's 500 Songs that Shaped Rock and Roll". Slim had a major impact on rock and roll and experimented with distorted overtones on the electric guitar a full decade before Jimi Hendrix. 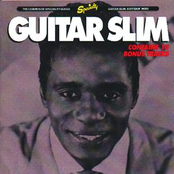