Sato grew up the eldest son at a temple near the southernmost tip of Japan’s southernmost island, Kyushu. As a teenager, he sang Elvis Presley songs in the temple and spent his days recording music on an early multi-track recorder in the temple’s storeroom. A few years later, he moved to Kyoto, where he took up the bass guitar. At 20, he began teaching himself the piano, and shortly thereafter began playing with Masaki Ueda and other artists in the Kyoto area. 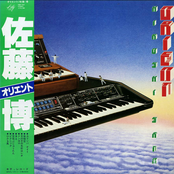