Hitomi Tohyama (当山ひとみ) is a Japanese singer who made her debut in 1981 using the stage name "Penny." Throughout the '80s, she recorded a number of albums in the City Pop genre that mixes Pop, R&B, and Funk influences. Her album "Sexy Robot" is highly sought after by vinyl collectors. She's still actively performing, and she blogs at https://ameblo.jp/shineon-penny/ 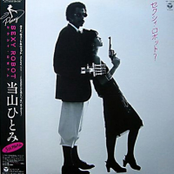