The Honk Band began in Laguna Beach in 1970. In 1972 they produced the music for a very popular film on surfing called “Five Summer Stories.” One of the songs on that sound track LP – “Pipeline Sequence” – became a #1 hit in Hawaii and climbed the charts in Australia. They later headlined a concert in Honolulu. From 1972 to 1975, Honk was featured at high school and college concerts all over California, as well as at LA hot spots such as the Whiskey Au Go Go and the Troubadour. 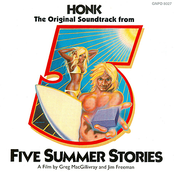