Dubbed "The Brazilian Sade" (even though she has a sound that is all her own), Ive Mendes possesses sultry Latin looks, an infectious personality and an incredible talent for both writing and singing. She has been a star in her native Brazil for a while, and has found success in Japan (signed to EMI), Spain and the UK. Her debut album featured a collection of her own songs in both English and Portuguese. The origins of her Portuguese are obvious; the origins of her English far more elusive: she learned English through her song writing. 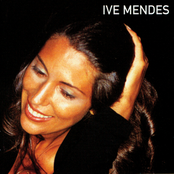