Jamie N Commons is a blues rock and folk musician from Bristol, England. Commons said The Allman Brothers Band, the soundtrack for O Brother, Where Art Thou?, and Moby's Play were important, early influences. His first EP, The Baron EP was released in 2011. His second EP, Rumble and Sway EP, was released in March 2013 with Interscope produced by Alex da Kid, who signed him to his label KIDinaKORNER. He is featured on Eminem's eighth studio album The Marshall Mathers LP 2 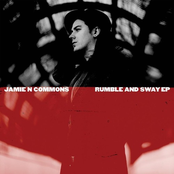 The Bones of J.R. Jones