Janne Schra (born Janneke Maria Ali Schra, 21 december 1981 in Laren, The Netherlands) is a Dutch singer-songwriter. Janne grew up in Huizen and studied Art School in Utrecht. She fronted the band Room Eleven, which she co-founded in 2001, until the band's demise in 2010. Room Eleven toured internationally and was particularly succesful in Japan. After the band's split she started to perform under the moniker Schradinova, but she reverted to her own name after one Schradinova album. 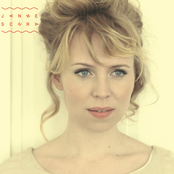