Jeff Simmons is a Rock musician and former member of Frank Zappa's Mothers of Invention. Simmons provided bass, guitar, and/or vocal for the group between 1970 and 1971. He left The Mothers just prior to the filming of 200 Motels in mid 1971. Jeff later returned to the group for a time during 1972 and 1973. Zappa and Mothers albums he appeared on include Chunga's Revenge (1970), Waka/Jawaka (1972), Roxy & Elsewhere (1974). Simmons stayed in Los Angeles and completed two solo albums for Straight Records. 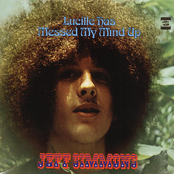 Lucille Has Messed My Mind Up