Perhaps best known for his work as the compelling counter-voice to singer and wife, Stacey Kent, Jim Tomlinson (b: 8th Sept 1966) is increasingly recognised as a distinctive saxophone voice in his own right. The release of his debut album as leader, Only Trust Your Heart (Candid 2000), was greeted with enthusiastic and universal acclaim. His follow up CD, Brazilian Sketches (2003), was named Jazz CD Of The Week by the Observer newspaper in the UK. 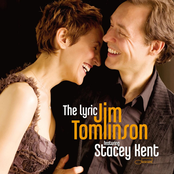