There is more than one artist with this name: 1) A Chilean super-group, Los Mono is the collaborative effort from some of the top musicians/producers of the country: Cristian Moraga AKA C-Funk, (also released by Sonic360) is one of the most recognised musicians in Chile and, as founder of the 'Los Tetas', which was one of the most influential alternative bands that heralds from Santiago in the last decade with sales that garnered 4 Gold Records. Other members include Sebastian Silva (member of the popular Chilean band CHC) 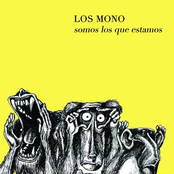