Machito (born Francisco Raúl Gutiérrez Grillo, February 16, 1908? – April 19, 1984) was an influential Latin jazz musician who helped to refine Afro-Cuban jazz and to create both Cubop and salsa music. He was raised in Havana alongside the singer Graciela, his foster sister. In New York City, Machito formed the band Machito & His Afro-Cubans in 1940, and with Mario Bauzá as musical director, brought together Cuban rhythms and big band arrangements in one group. 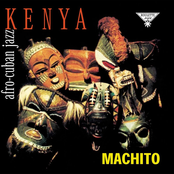