Man Jumping were formed in the mid-1980s from the members of Lost Jockey who were variously described as playing 'systems music' (which refers to the repetitive musical loops and themes of avant garde US composers such as Steve Reich, Philip Glass and Terry Riley) or 'systems funk'. The band formed Man Jumping to get away from that tag. Instead they drew on jazz fusion, ethnic musics, electronics and funk to create an alternative world dance music 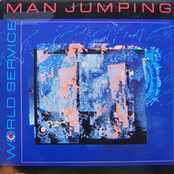