Marlene (born Marlene Strand, sometimes stylized as MARLENE ∞) is an electropop singer from Stockholm, Sweden. Her debut EP Indian Summer was released 16th May 2014, featuring the previously released singles Bon Voyage and Stay Awake. She was featured in Silvana Imam's song För Evigt in 2015. On the 9th of June 2017 she released Sweet EP including 8 song including singles like Next to me. 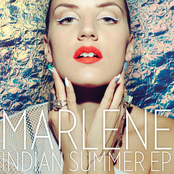