The word Meghdol is actually borrowed from a poem by Baudelaire. By Meghdol, the band mean their desire to surrender themselves to infinity in the most desirable way. And also, the clouds hold a special meaning in their hearts and their music to rise above all and see the world without prejudice. They wouldn't say that they fall into any particular genre of music. But they are experimenting with a style of music called theatrical music. They have released two studio album titled Meghdol and Shohorbondi from label G-Series. 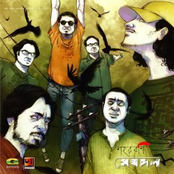