The first time we heard 29 year old Nino Moschella we knew he had a magic touch. Gritty, soulful, and honest, his vocal styling and unique funk productions were a must-have for Ubiquity. Imagine our surprise when we learned that this golden voice belonged to a rough n’tumble Irish-Italian-American character from around the way. Fellow Bay Area crooner Bart Davenport brought Nino Moschella to our attention. He mailed us a demo of tracks that had been recorded at Moschella’s home studio. 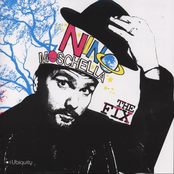