Norma Jean Wright is an American singer who was the female lead vocalist for soul, R&B and disco group Chic, from 1977 to 1978. After singing lead vocals on the band's self-titled debut album in 1977, she left for a solo career the following year, releasing the Nile Rodgers and Bernard Edwards-produced Norma Jean album. The "High Society"/"Hold Me Lonely Boy" single followed in late 1979. 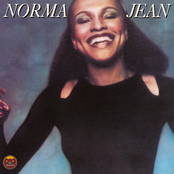