Oliver Cheatham (February 24, 1948 – November 29, 2013) was an American singer who is best remembered for his 1983 hit "Get Down Saturday Night". Cheatham was born in Detroit, Michigan. He was encouraged to sing by his mother, and joined several local groups including The Young Sirs, Mad Dog And The Pups and Gaslight before releasing a single, "Hard Times" on the Tier record label. He then joined another group, the Sins of Satan, the group later being renamed as Roundtrip. They finally took his name and recorded two albums as Oliver. 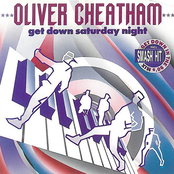 Get Down Saturday Night