The Orrenmaa Band features Tuppu Orrenmaa, Pekka Pohjola, Billy Cobham and a host of other gifted players blazing away on an upbeat, sometimes rocking, sometimes funky / jazzy, supercharged instrumental power fusion album that also benefits from the uptown edge of the Tower Of Power horns. A relatively unknown guitarist in the U.S. but one who has a track record in his native Finland, Tuppu clearly channels the sonic powers of Cobham and of course Pekka Pohjola - one of the leading 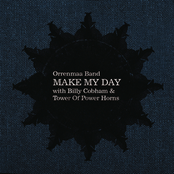