Malcolm Welbourne's personification "Papa Mali" is a salute to his home territory of north Louisiana. Malcolm was raised in Shreveport, where absorbing the blues along Bayou Pierre was just as much a matter of course as chasing the mosquito fogging truck with friends -- and equally intoxicating. He spent his summers with grandparents in New Orleans digging that city's rhythm (and blues) and after hearing the Wild Tchoupitoulas and the Meters on the streets of New Orleans at age eleven 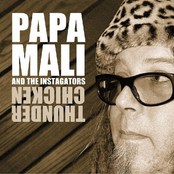