Peetie Wheatstraw (December 21, 1902 – December 21, 1941) was the name adopted by singer William Bunch, a greatly influential figure among 1930s blues singers. Although the only known picture of Bunch shows him holding a National brand tricone resonator guitar, his primary instrument was the piano. Wheatstraw was born William Bunch in Ripley, Tennessee but grew up in Cotton Plant, Arkansas, where his family relocated soon after his birth. Little is known of his early life 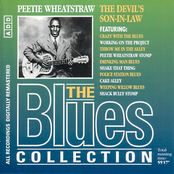 The Blues Collection 82: The Devil's Son-In-Law