Philip Paul Miller (22 January 1949 - 18 October 2017) was an English progressive rock/jazz guitarist who was part of the Canterbury scene. Miller was born in Barnet, Hertfordshire. He was a member of the bands Delivery, Matching Mole, Hatfield and the North, National Health, Short Wave (with Hugh Hopper(†), Pip Pyle(†) and Didier Malherbe) and has since worked in solo projects and in his band In Cahoots, which he founded in 1982 with Richard Sinclair, Elton Dean(†), Pete Lemer and Pip Pyle. 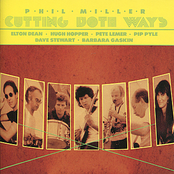