In the spring of 1992, Steve Sauer (guitar) and Scott Cunningham (vocals, bass) first met and began writing music together. Through the summer, an early incarnation of Promenade was founded and went on to release the Dave album, Single, and the full length, Francis Coming Home (out of print and gladly forgotten). With songwriting surging, experimentation unfolding and long-time friend Jason DeBruer (drums) joining the ranks in the summer of ’97, the band was complete and had truly found their sound. 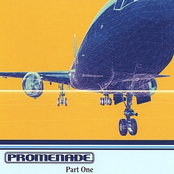