Ridin' Thumb is a Danish soul/funk orchestra formed in 1989 by the two guitarists Martin Finding og Nicolai Halberg. In 1997 Jonas Winge Leisner replaced Niels H.P. as the primary vocalist. Their style can be compared to artists such as Tower of Power and Jamiroquai. The band usually unites for an annual concert in the time between Christmas and New Years Eve. The concerts are held at the Copenhagen Jazz House. 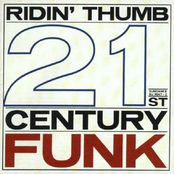