Robert Timothy Wilkins (January 16, 1896 – May 26, 1987) was an American country blues guitarist and vocalist, of African American and Cherokee descent. His distinction was his versatility; he could play ragtime, blues, minstrel songs, and gospel with equal facility. Wilkins was born in Hernando, Mississippi, 21 miles from Memphis. He worked in Memphis during the 1920s at the same time as Furry Lewis, Memphis Minnie (whom he claimed to have tutored), and Son House. 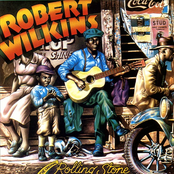