Sammy Price (October 6, 1908 – April 14, 1992) was an American jazz, boogie-woogie and jump blues pianist and bandleader. He was born Samuel Blythe Price, in Honey Grove, Texas, United States. Price was most noteworthy for his work on Decca Records with his own band, known as the Texas Bluesicians, that included fellow musicians Don Stovall and Emmett Berry. The artist was equally notable for his decade-long partnership with Henry "Red" Allen. 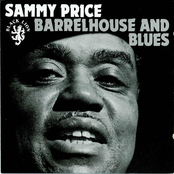