Scott Kinsey is a keyboardist best-known for his work with the jazz fusion group Tribal Tech. He has also performed or recorded with numerous other artists including Gary Willis, James Moody, Bill Evans, Robben Ford and the fusion group Uncle Moe's Space Ranch with guitarist T. J. Helmerich. He is a 1991 graduate of the Berklee College of Music in Boston, and has also recorded numerous soundtracks for major motion pictures including "Ocean's Eleven" and "Ocean's Twelve". 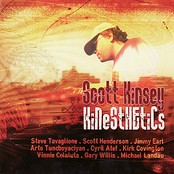 School of the Arts