Sexy Dancers used to be a Czech funk band founded in 1998. The founder was composer and producer Roman Holý. The band released their only album in 1998 - 2CD Butcher's On The Road including singles: 04205, Some People and Slim Jim. The band had been concerting for a short time, before came apart. One of the reasons was it's composition. Similarly to J.A.R. Sexy Dancers were formed by artists from other existing bands and music projects. Members: 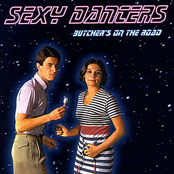 Butcher's on the road