SHAUN BAXTER - BAND LEADER 1992 Formed Shaun Baxter Band and gigged extensively in London. Headlining at venues such as the Jazz Cafe and the Orange. 1993 Recorded (also wrote, arranged and produced) debut album Jazz Metal. 1994 Signed worldwide deal with Zok Records. Jazz Metal was made album of the month and received five stars from many domestic and international magazines. As an indication of his popularity (and certainly not of his talent), in 1996 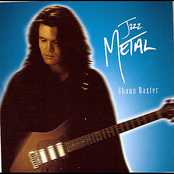