Steve Arrington (b. 1956) is an American singer, songwriter, drummer, producer, engineer and minister who grew up in Dayton, Ohio. Arrington played in various local bands before joining and touring with The Murphy's, a lounge band out of Toledo, Ohio, in 1975. Approximately a year later, Arrington relocated from Ohio to San Francisco, California where he learned Latin percussion and drumming from Coke Escovedo and Pete and Shelia Escovedo (aka Shelia E. 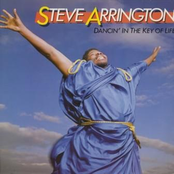 Dancin' in the Key of Life