Born in Pasadena, California, Steve Carlson has played guitar and written songs since the age of 10. His heartfelt, lilting choruses and rolling country rhythms are no urban cowboy accents. They come from a lifetime dedicated to the music he loves. Currently residing in the hills above Hollywood, California, Steve has spent the last few years focusing on collaborative songwriting with band mate, Christian Kane, and their band KANE. Steve first teamed up with Christian Kane in 1998. 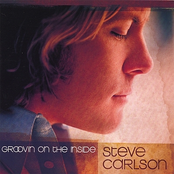 Groovin' on the Inside