Tal Wilkenfeld is an Australian electric bass player. She moved to US as a guitar player and then switched to electric bass. She recorded her debut album Transformation in 2006. Wilkenfeld has played with many renown artists, like Chick Corea, Hiram Bullock, The Allman Brothers Band, Eric Clapton, Jeff Beck, Wayne Krantz and Vinnie Colaiuta. Biography Widely hailed as "the rising star of the bass guitar," Tal Wilkenfeld first picked up guitar at the age of 14, in her native Sydney, Australia. 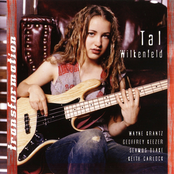