The Fabulous Counts were an American soul-funk group from Detroit, Michigan. They won local acclaim as an instrumental group and as a backing ensemble for visiting solo acts after their formation in 1968. Working with producer Richard "Popcorn" Wylie, they released the instrumental single "Jan, Jan" on Detroit's Moira Records that year, which narrowly missed hitting the US R&B charts that winter. Their second single, "Dirty Red", passed without trace, but the third single, "Get Down People", hit #32 R&B and #88 on the US pop charts. 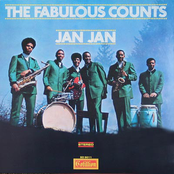