James Timothy Shaw (August 9, 1939 – January 30, 2014), known as The Mighty Hannibal, was an American R&B, soul and funk singer, songwriter and record producer. Known for his showmanship, and outlandish costumes often incorporating a pink turban, several of his songs carried social or political themes. His biggest hit was "Hymn No.5," a commentary on the effects of the Vietnam War on servicemen, which was banned on radio. James Timothy Shaw was born to parents Corrie Belle and James Henry Shaw 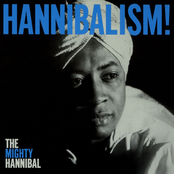