The Peter Malick Group is an American jazz group formed in Boston in 1994 by Peter Malick (born November 28, 1951, in Brookline, Massachusetts), an American musician and record producer known for his work with blues musicians and for early collaborations with Norah Jones. Malick enjoyed a surprising career resurgence early in the 21st century after decades of obscurity, much of them spent outside the music business. His first taste of success came in his teens in the 1960s; he was 16 when his band Listening was signed to Vanguard Records. 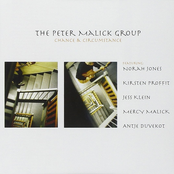